A Kickstarter campaign from MeFite symbebekos

MetaFilter members are a talented, creative lot and when they have big projects in need of fundraising they often go to Kickstarter. For the past year or so we've been running the MetaFilter-curated Kickstarter page, showing off all current and successful past projects from MetaFilter members. This page is open to any member of MetaFilter with an active project at Kickstarter. Just contact us to share your KS url and we'll get it added to the page lickety split.

Metafilter's local musicians are spending the month of July working up covers en masse of the twelve tracks of Radiohead's seminal OK Computer. It's early yet, but there've been some fun entries already, and this is maybe my favorite of the bunch: a Mariachi style Spanish-language take on "Subterranean Homesick Alien", by user hanoixan.

And he even got some help with the translation from Ask Metafilter. 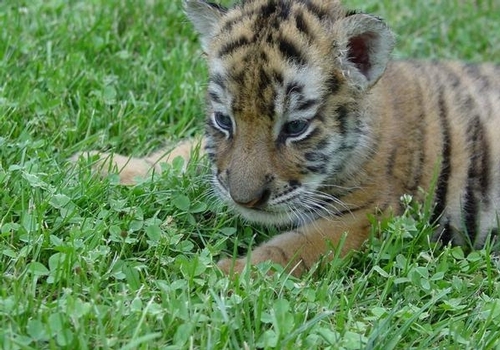 Member futz has some experience with baby tigers

I took care of 2 tiger cubs at my house for a 3 days. Had to bottle feed them every two hours. Yes, they are cute as hell but even at that young age it was really hard to deal with their claws.

"Fall is really beautiful, you know. I guess I never noticed." Football Practice (1968) by Hunter-Desportes (cc by)

How one man made the decision to end his football career before it got ended by injury.

By my junior year I became a starter because the guy ahead of me popped a hernia. By that time I was the final OL from my peers in freshman football camp. All the other O linemen I had practiced and bonded with had to quit the team due to injury, one by one. Blown knees, wrecked lower backs, loose shoulders, and one concussion so spectacular that I remember the sound to this day.

During the second game of the year one of the juco transfer OL went down with a knee injury. I heard him yelp as he went down. As I watched him get carried off the field, I had an epiphany which was: "What the HELL am I doing?" I was like the poor soul in the war movie who turns around to realize a sniper has taken everyone else out.

No, a better analogy would be "the cop who won't stop talking about being a week from retirement". Having this realization on the 45 yd line in the middle of the 3rd quarter is not really ideal. I spent the rest of the time with my mind racing during every single play - is that the sound of me about to be blindsided? Is that the pocket collapsing towards my knee?

"It wasn't your imagination, you genuinely were seeing different ads to normal on the week before your birthday!"

Facebook Disc by dannysullivan from this article (cc by)

I place Facebook ads on behalf of my workplace and looking at the ad console has been sort of fascinating to me as an end user in explaining why I see some of the ads I do and how I can stop some of the more obnoxious ones from appearing....

Most [facebook ad targeting] is based off user submitted data (if you don't tell Facebook how old your kids are, they can't serve you ads based on it) but some of it is stuff you wouldn't expect to be used that way. It brought me up short when I realised Facebook could use my submitted location and the submitted locations of my family members to target me as somebody who was isolated from my loved ones. I never saw any ads for the Scientologists or anything, just innocuous stuff, but it still creeped me out a little.

MysticMCJ on the audition process.

I have a tremendous amount of respect for anyone who can get through an audition process like this and not leave it as a broken shell of a person, let alone actually get accepted. Going to a state university nearly killed of all desire I had to actually play any music... I cannot imagine everything that would lead up to an audition for such a highly regarded orchestra.

How is someone supposed to survive a nuclear blasting mission? Nuclear Bomb by IndigoValley (cc by)

If you ever wondered what happens when a nuclear missle's blast radius exceeds the operating range of an aircraft or sea vessel that deploys it, member Dreadnought has a great explanation of the two (air & sea) scenarios and the great lengths and great luck required to survive them. Without the Higgs boson, electrons (and quarks) would be massless. MeFi member physicsmatt helps explain it for the layman. Car fires: reality vs. the movies Firefighters by AMagill (cc by)

In a question about whether or not cars on fire blow up like they do in movies, member sanka happens to be an accident investigator and clues us all in on what a car fire is really like:

What generally happens when a car is allowed to burn to completion is the tank itself will melt through (almost all are plastic tanks now), allowing the gas to escape, then ignite. It will look like a large grease fire flare up, not a boom or blow up.