22 years and counting
Happy Birthday, MetaFilter! You're 22 this year! That's rather a lot. Happy Birthday to Us! (Celebrate with podcast transcription and Pokemon Go) If you're looking for a low-key way to celebrate, drop in and join the wise, suave, and good-looking volunteers who help transcribe the podcast. (Thank you podcast transcribers! You are the best!)

... or if you prefer your celebrations more active, join the stalwart band of Pokemon Go obsessed Mefites as they report back from the field.

What was it like to be alive on September 15, 1985? "from the mundane to the profound, what do you remember about that time?" 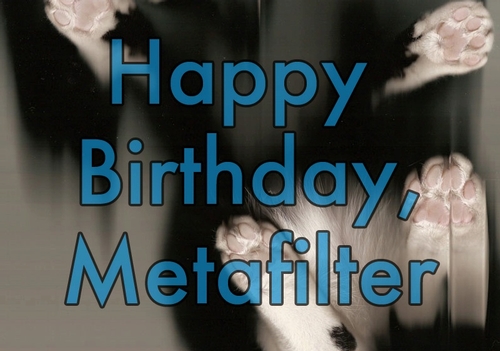 Yorvit the cat, celebrating Metafilter's birthday in the traditional fashion

It's Metafilter's 16th birthday today! Every year we celebrate with a post about scanning cats, in homage to the very first live post on the site, back on July 14th, 1999.

In the ensuing years, the original cat-scan.com site disappeared; in 2011, mathowie bought the domain and turned it into a collection of user memories from the first 12 years of Metafilter.

A lot has changed on the internet in 16 years, but Metafilter's been here all along, being one of the best communities on the web. We're thankful to all the members who've been part of that, all the readers who have come along for the ride, and all the wonderful folks out there making the internet a place worth linking to and talking about. Now blow out your candles and make a wish.