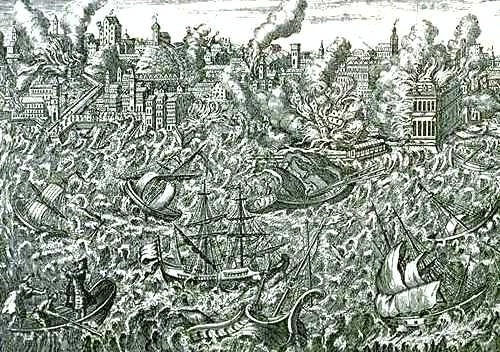 Copper engraving from 1755 shows Lisbon in ruins and in flames

Remembrances of things past via recent history posts on the blue:

More than 600 secret societies in the US, documented in 1899: here is "The Cyclopædia of Fraternities"; a compilation of existing authentic information and the results of original investigation

"Count Pier Francesco Orsini was a man much given to melancholy": Orsini's Sacro Busco, or the Park of Monsters

"In 1986, workers in Sichuan province in China were digging for clay for bricks when they stumbled onto an archaeological treasure: a major site for a Bronze Age civilization previously only guessed at"

Road tripping back in time on the Old Spanish Trail: "Today, you can still find remnants of that road, and there's a group of people who are trying to revive this historic highway."

"after the earthquake, King Joseph I was so afraid of buildings he moved out of Lisbon; his claustrophobia was so severe he lived in tents for the rest of his life. Artists depicted the chaos of the city in the aftermath of the disaster": The Lisbon Earthquake of 1755