Craigslist tip: Put some fruit on that table.

A sweet memory of an old song It was ready, I dug out my box of 45's and we loaded it up, hit the switch on the back and watched the lights come on. Sean punched two buttons, the mechanism started to work, picked up a 45, place it on the turntable, and we listened to that Wurlitzer spit out Louie Louie, a record I had purchased used over 20 years ago.

Kickstarter tips and stats from an academic 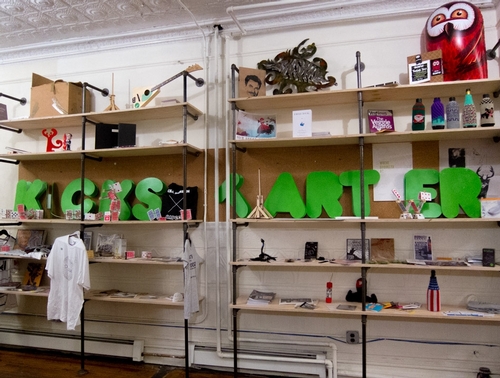 MeFi member blahblahblah is an academic researcher that has studied Kickstarter and shares a bunch of really interesting tidbits and statistics about successful campaigns.

Your chances go down 13% if you make a spelling error. [...] 21% of successful projects have female cofounders. Being a woman has no statistical bearing on outcomes... On spiders and eyeballs Funnel Web with venom by dnatheist (cc by)

The next day a trip to the opthomologist revealed that the venom had acted like a strong acid/ alkaline and burned a hole in the iris, just missing the pupil (no glass cuts thankfully!). Long-term, the sight in my left eye is a bit worse than it should be. I also get "spider eye": if I'm tired or stressed or jetlagged, my spider eye goes incredibly red, hot and bloodshot for about 24 hours. It's not the most spectacular spidey-super-power of them all, but I'm happy enough to have it :)

Alice Russel-Wallace discusses why Shaun of the Dead is THE definitive opthamological treatment for spider envenomation incidents. A peach of ripening advice Former fruit agency and Whole Foods employee jocelmeow offers amazing detailed advice on how to find and treat yourself to the best peaches possible.

Ethylene (the fruit's natural ripening gas) output rises for a while but then levels off. The level of sugar the fruit contains and its red color stay exactly the same. The effect of all these changes is that the fruit goes from hard and sour to soft and sweet.

see a random favorite
pb made a method for users to go back to a randomly favorited post. MetaFilter is 14 years old today, and tradition dictates a reposting of the first thing ever posted to the site.

"I suddenly felt I had found my tribe." Hazards of Riding Bears by CarbonNYC (cc by)

As these things do, this scene began a bit underground and then started to gain momentum and then really EXPLODED. Suddenly the bears weren't a movement, they were a marketing niche. And the energy of the scene began to change. Big meetups became more, for lack of a better term, corporate. Suddenly you could buy "bear" merchandise easily rather than having to seek it out. Bear clubs were springing up all over the country, and then breaking up into smaller groups as the fights between the "we want to fuck" and the "we want to socialize" groups surfaced.

hippybear talks about the changes that have happened in a different sort of bear movement.

A few of the tales with me and bears. Me in my head: Okay Momma I'm just going to go sideways and climb up as high as I can get on this big pile of logs. I'm sending you vibes that I mean no harm. I climb. Mamma rejoins her cubs. None of them even act like I'm there. I then spend the next two hours sitting on that pile of logs as Momma and cubs wander around foraging. I swear they were laughing at me.

MeFite Jalliah discusses some of their bear encounters. Fame is not that important to historians. Famous people's lives are generally well documented in sources other than a journal - newspapers, proceedings, parodies, letters, legislative records, etc. PRivate people's lives are, in fact, a lot harder to find out about and lot more interesting to people practicing history today. What we know about events like the Civil War or even World War II, life aboard an American whaleship or on the frontier, we mostly know by the writings of non-famous people who simply observed and recorded the detail of daily life.

At some level it's impossible to say what historians of the future will find important and interesting about our time, and it will change, anyway. Diaries of non-famous people were scoffed at for a long time before they began to be taken seriously as sources of historical evidence. But I think there are some general principles.

Miko gives an in-depth answer from a historians perspective.

Now looking back, some of this was my fault. I was stupid. One of my co-workers hammered in to me that I needed to get direct deposit ASAP, and yet between the stress of work and school I kept forgetting about it. I had no experience at the time setting up a bank account, or setting up direct deposit, and so these things that in retrospect weren't a big deal felt like insurmountable obstacles. And all the stress I was surrounded--a new job, working nights, a new school, a new apartment, new bills to pay, new classes, being broke, etc.-- made it that much easier to keep putting it off. Had I been more established, and less overworked, none of this would have been an issue. But because I was weak, precisely because I was weak and stupid and stressed, they preyed on me.

Green Winnebago talks about the sleazy world of jobs that pay you in debit cards.
07/02/13
by jessamyn Self Portrait Reflected by rocket9.net

Due to the nature of pinball, the ball ends up in places where it's not supposed to be. What's awesome though is that there are machines that recognize when this has happened, and reward you for it.