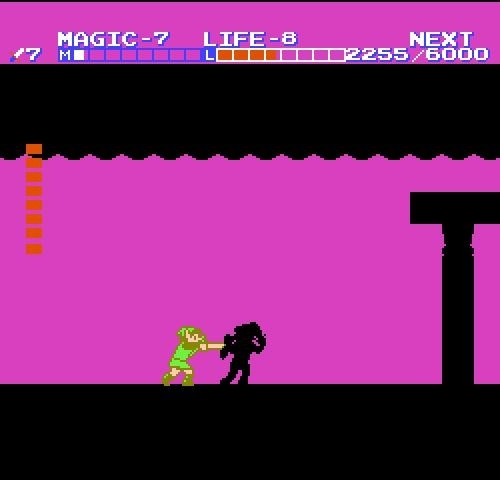 In JHarris's excellent post about Zelda II: The Adventure of Link, Mefi user otolith tells the story of how they finally beat the game, twenty years after giving up on it:

It was one of those games that was just too...frigging....hard. Along with Blaster Master and Castlevania II, it seemed stupidly impossible...I don't remember when, but there must have come a time when I punched the power button on the console in frustration and walked away from it for the last time. And then twenty years passed and I don't recall thinking about the game once in that time.

But a few years ago I was traveling and staying with a friend of mine who owned a game cube. There it was on his system, Zelda II...A wealth of small childhood memories that had been locked together with Zelda in the back of my brain. It was an utterly unique experience for me, reliving those memories sequentially as the game progressed. Which happened somewhat rapidly because I was now A BEAST at Zelda II....

Yes, I've been to the Mütter Museum "What other unconventional places in the world feature an equivalent mix of amazement, craziness and depth?" 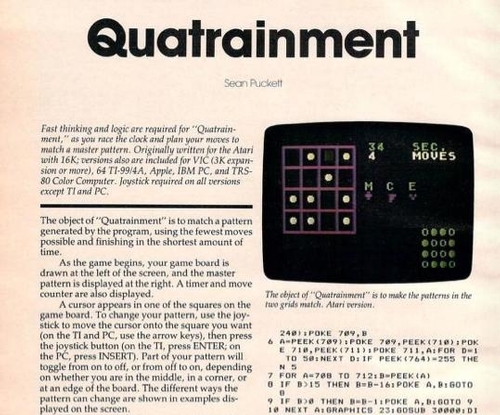 seanmpuckett tells the story of how he wrote a BASIC program to play a Merlin-like game which made it into Compute! magazine and was later the subject of an article in Mathematics Magazine.

A Christmas Eve Secret Quonsar Tale of Giving and Receiving

Bondcliff made rouftop a ukulele. Rouftop made bondcliff a song with that ukulele, with help from scottandrew. Sing along with us....

I grow carnivorous plants as a hobby jamaro tells us about some interesting features of the plants we learned about in grade school.

One can also temporarily disable the insect catching ability of Drosera (sundews) and Pinguicula (butterworts) by covering their sticky surfaces with misted water or a good coating of dust but these plants' glands tend to drool their way out of that predicament within a day.

What's the appeal of Gangnam Style?

Homeboy Trouble spells out what he thinks makes Gangnam Style so catchy with ... everyone.

Summary: Mostly I think it's the horsey dance. And yelling at a butt.

The very Bestest Of Trophies by terren in Virginia (cc by)

We've been running a casual best post contest for December on MetaFilter (using audience votes via the fantastic flag) and so far the first two weeks of winners have been decided:

Check them all out and stay tuned for next week's winners. 8th Night by CarbonNYC (cc by)

How do I get the wax out of this menorah? This thread has many great reminiscences of Ravi Shankar including this lengthy explanation of the effect (or lack thereof) of religious tradition on Indian music.

India is a complex place, and it's easy to oversimplify its cultures. While partisans of both of its major religions may occasionally spin the musical history to emphasize their contributions to it over others', the rough truth is that both have contributed substantially, in the centuries since the Mughals arrived, to the synthesis that is the North Indian musical tradition.

Good information about ichthyosis from many sources

A post about a child with a rare genetic skin condition called harlequin ichthyosis is filled with information from a longtime MeFite who runs a personal blog about another form of ichthyosis and then a comment from the child's mom. A parent and child have a long talk about Victoria's Secret, thongs, peer pressure, and sexuality.

Married in Seattle by City of Seattle (cc by)

Various MeFites talk about their experiences being at Seattle's City Hall for the first day of gay marriages in Washington State.

No two groups were alike, except in the near-universal joy and and love that was palpably infectious all day.

I was also really impressed by how well-organized it was. We were pretty much running ahead of schedule all day, and it was clear that the mayor's staff had made this a labor of love, and really wanted to make sure each couple had a special day.

Made me so happy to be alive at this point in history, and proud to live in a city like Seattle.

See more photos in the City of Seattle's About to Get Married Flickr group.
12/10/12
by jessamyn Instrument Of Evil? by greeblie (cc by)

Everything you ever wanted to know about the Magic 8-ball.

Is a heat pump worth it? MeFite larkery explains some of the data you have to assess when considering whether a heat pump is worth the expense.

In conclusion: it's really hard to work out whether heat pumps are a good idea or not - you need a lot of different data to get a good result, and some of those data are hard to come by. 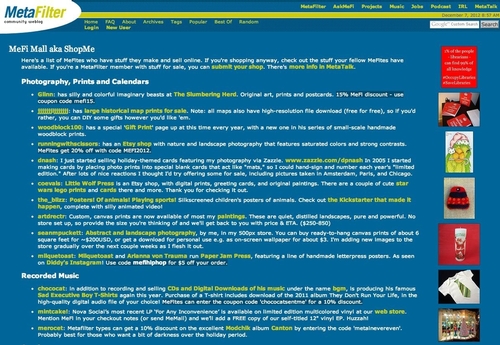 It's that time of year, so I thought I'd help everyone's holiday shopping out by compiling a list of gift-related resources from MetaFilter.

Helping finding specific gifts is a popular request at Ask MetaFilter and here is a recent list:

If you're into giving books as gifts, the wiki also has one of the most exhaustive categorized lists of previous questions about books. Take a gander, pick a subject, and check out all the amazing old threads about the best books in any category.

Lastly, the fine folks of Ask MetaFilter also have compiled a list of all the best gift guides found online. And as always, we set aside a "mall" of all the MetaFilter members selling gifts online, sorted by category.